In drawing tutorials, you often encounter techniques to create shapes and volumes. In order to make a convincing drawing, you need to create value (lightness or darkness) and contrast (difference and change in size, texture, value, and others).

These are the techniques used to draw value and contrast.

Gradated – This is done by holding the pencil as if it’s laying on its side. Then you use the side of the lead instead of the point of the pencil to gradually shade from dark to light. The pressure applied on the pencil must be consistent with the line weight. 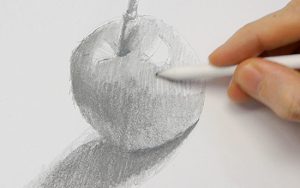 Blending – The shading is smooth and there are no visible lines. The technique begins with drawing heavier lines from one corner and gradually thinning it out or by a gradated shading. Then the lines are either blended using a stump, erased to make lighter values or smoothed out using the same pencil for creating the lines to make it darker.

Hatching – Hatching simply means drawing a row of lines facing the same direction. If you’re shading one part using a diagonal line, the rest should be uniform. Drawing these lines closer or farther will create the illusion of darkness or lightness, respectively. 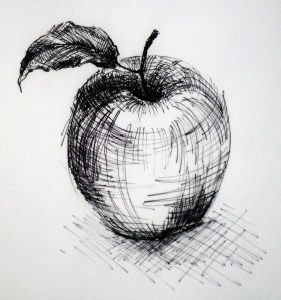 Cross-Hatching – More than two sets of lines going in different directions are used for this technique. The lines appear to criss-cross. For example, if you started with horizontal lines and wanted to make the object darker, you draw vertical lines on top of the first set. The closer the lines, the darker the object.

Rendering – The use of this technique creates the lighter values or the highlight in a drawing by erasing the lines after blending. The highlight is the part of the drawing where the illusion of a light’s reflection on an object is supposed to be intense. The highlight is often the white or light space in the shading.

Random Lines – Your lines don’t have to be uniform all the time. Random lines and even wavy lines can create textures as well as value and contrast. This is especially great in creating the mid tone or the area in a drawing where the illusory light still hits the object but is less intense than in the highlights. 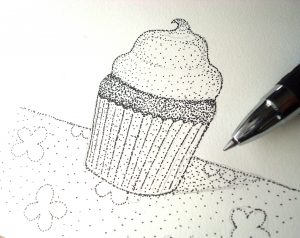 Stippling – Instead of lines, you can also use dots to create value and contrast. Begin by drawing darker or heavier dots in one corner then gradually lighter dots as you proceed. The closer the distance between the dots, the darker the value produced as well.

Scumbling – This technique uses circular lines that look like squiggles. It’s similar to using random straight and wavy lines and is used to create a texture for the object.

Contour-Hatching – A type of hatching than follows the contour of the object. If the object is a triangle for example, one side is the basis for creating diagonal lines. The gradual shift from dark to light strokes helps direct the eye to the highlight and is a great technique to use on rounded objects.